Helen Vivienne Fletcher's play, Justice is Blind, has won the teenage category of Playmarket's 2020 Plays for the Young competition.

Justice is Blind is about a group of teenagers rehearsing for a school play. Some of the students have disabilities and are coming up against access issues within the school, along with ableist behaviour from some of their non-disabled cast mates. 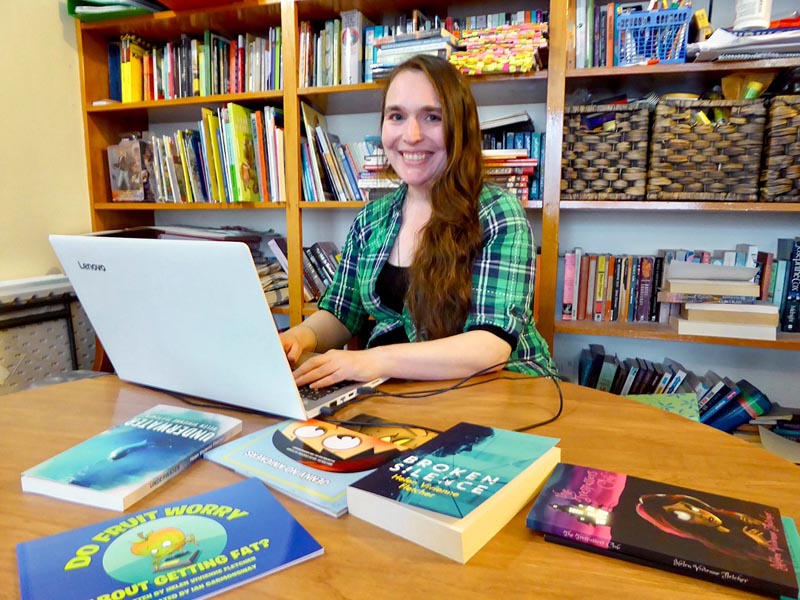 The disabilities are represented by another actor: for example, Ella, who has rheumatoid arthritis, is piggy-backing “Arthur”, her arthritis, and Liam is followed around by “Diedre” and “Axel”, the mean and sarcastic personifications of his depression and anxiety. These disability personifications get fed up with the way they’re being treated, and separate from the people they normally inhabit, putting the worst offenders on trial.

A Wellington writer, spoken-word poet, playwright and creative writing tutor, Helen Vivienne wrote the play so it could be performed in schools.

“It would be cool to see disabled and non-disabled students perform it in schools. I think there would be lots of fun challenges for young actors, as well as some opportunities for useful discussions around disability,” she says.

Helen Vivienne had been thinking about the play for some time but says it was written quite quickly. “I’d been playing with this idea for a long time in different forms. When I first came up with it, I wasn’t sure whether it would be a play for adults, a short film or even a web series. Over the past couple of years, I’ve written various scenes for each of those iterations but it never quite came to fruition.

“Late last year, I finally worked out that it should be a play for young people, and I wrote the script in the two months leading up to the Plays for the Young competitiom deadline.”

This is the third play Helen Vivienne has written. The first, How to Catch a Grim Reaper, was staged at BATS Theatre by Young and Hungry in 2015. Helen won the Outstanding New Playwright Award at the Wellington Theatre Awards for it and was also shortlisted for the Playmarket Plays for Young Award. Her second play, Ruminate, was staged as part of The Memory Plays in 2018.

“I’m a plot-based writer and I often have very tense, high-stakes stories," she says. "I enjoy writing suspense and like to include a little bit of mystery, and slow-reveal of information.”

She describes her writing style as “often quite gritty – I have a very black sense of humour – and I enjoy exploring dark, twisty stories, especially in my young adult fiction. I describe my poetry style as ‘funny tragedy’, and enjoy finding the light side of difficult moments from my own life.”

These ‘difficult moments’ are the result of several chronic illnesses Helen has had for most of her life. “My illnesses influence my writing a lot – quite literally in that some of my vivid dreams become plots but also in the subjects I tackle. I’d like to be able to use my writing more to raise awareness by finding the intersection between great, engaging and humorous stories, and meaningful pieces that help challenge ingrained stereotypes and prejudices.”