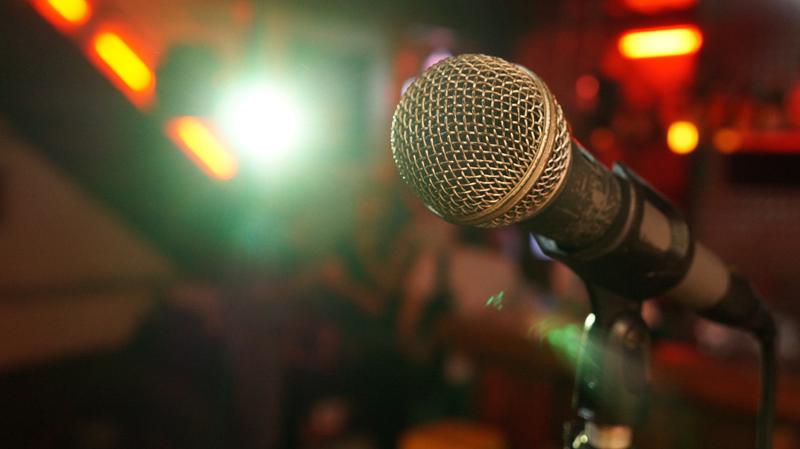 I did stand up comedy part time for five years. I'm in a wheelchair and cannot talk. I used text to speech to speech software to tell jokes.

I was originally planning to do it on a more casual basis, something like a set every three months. However that didn't happen as I was asked to enter a regional competition on my first night. I later went on to win that competition and ended up performing overseas.

I also misunderstood the industry and did a few things wrong. I didn't understand the importance of tweaking my set and performing constantly. I also wasn't good at interacting with bookers.

People loved my comedy however I just wanted a quiet life developing and maintaining websites. I was even impatient waiting for the crowd to stop laughing and occasionally would think to myself "it's not that funny" when the laughter would go on too long.

I am sure that a comic who complains about people laughing at his jokes could be a joke by itself.

You have to spend countless unpaid hours at open mics to tune your set. You may spend two hours at an open mic and only get 6 minutes on stage. This is just the training phase, most careers have them.

In some places in the U.S.A. you may only get two minutes of stage time at an open mic.

You probably could Email bookers to get involved with open mics; I did this myself. In 2020 many bookers would just post in a Facebook group to book people for open mics.

Later you could test by MCing (unless you cannot talk like me) and test when traveling. You would only have 5-20% as test content.

As a person who needed to script everything I needed to spend at least an hour preparing the script. I would also run the script through a few times to make sure the text to speech was perfect. If you can talk you would want to rehearse before going out.

I think that you should set aside time to work on your script. If you tend to get ideas during the day you could have a notepad with you so you can write them down. You would also want to spend time rephasing jokes to see if they get a better reaction.

For best results I think that you should develop a social media following so you could use it to promote your events.

You either have to organize your events yourself or have a manager do that.

You need to be good at dealing with bookers, fans and the media. This is especially true if you don't have a manager.

You can rule out earning significant money for 3-5 years. Many comedians also have other jobs for example going on TV.

Even local travel could be a significant expense if you're on government assistance. It's possible that your friends/family could take you if they're reliable.

If you're traveling further away you need more capital. My manager at the time set me up with a crowd funding campaign once; you could do the same. From a strategic prospective you would want to try to bring in similar money otherwise you would have to constantly find funding.

If you have other income streams you could reserve some of that money to travel.

Expenses should be tax deductible. I should have deduced expenses but didn't bother.

Travel expenses could possibly double if you need to take an assistant with you. Accessible accommodation can be more expensive too.

Road trips can be more expensive if you need a van. If you could get an electric van this could substantially lower your costs.

I would occasionally sell books at gigs to increase my revenue. Selling funny T shirts would be another route I would consider, even if people are told to go to a website to purchase them.

The refusal to let me MC had a negative impact on both my finances and stage time. I believe that I could have found creative ways to MC. If I really wanted to MC I would have tried running gigs myself.

A portable ramp for wheelchairs could help you get on stages and into apartments.

Depending on your level of disability and where you live venues could also be inaccessible.

I found networking difficult as a person who cannot talk. You might be different.

Limitations of text to speech

If people are not enjoying your set you can't just change course in the middle. You probably could do that with modern software or by custom programming text to speech software. Such a feature wasn't needed for most of my sets but could have been useful occasionally.

i didn't have a commercial license for a text to speech voice. This prevented me from releasing my content in various ways; such as selling audio clips for example. Later my two biological brothers went through the process on modeltalker.org and I got two voices for commercial use.

It’s possible that I didn’t rehearse in the same way or value stage time as much as I should have. I thought all that I had to do on stage was hit a button. This probably didn’t make me a well rounded performer.

I focused on blunt comedy because that’s my style. People were frequently cracking up at my jokes. I generally could be more controversial, although some stuff in the beginning didn’t land.

People complain about political correctness and how it’s ruining comedy. In my opinion this is absolute nonsense and most of the people complaining just want to make jokes about minority groups and complain when the group speaks up.

If some people don’t like your comedy then you should either ignore them or change it. Things adjust in comedy; just like every other industry.

The more mainstream you get; the blander you have to be. if you don’t like it then organize your own shows.

Fame and the media

One of the primary reasons why I quit stand up comedy is that I didn't like the idea of getting famous and dealing with the media.

If you do; that's great. Some media would reach out to you.

Occasionally you may want to reach out to journalists to see if they would cover you. If you do this close to launching a show this may be beneficial.

Most comments on social media would be positive from my experience. It's possible that it would be different for you. It’s also possible that questionable characters will send you unwanted messages; I'm also saying this from experience.

The main advantage of comedy for me was traveling. I specifically liked going to cities with big populations. Sometimes I would sync gigs in other cities with concerts.

Some people find seeing people laughing therapeutic, especially if they have depression.

Some people may see the potential platform you get as a good thing. You can use it to entertain and educate people. You can also use it to raise money (whether for yourself or for other causes) or to sell items.

Advice for people starting out

Don't worry if you're not perfect at first; you will probably get better and better.

Would I recommend stand up comedy?

Yes, if you want to do it, do it. I would recommend that you move to a big city for more opportunities and audiences.

A month or two ago I decided to move into creating comedy animated videos. I wouldn't have time to return to stand up comedy professionally while I do this. This suits me fine, I am not a people person.

I would really only try comedy professionally again if my websites fail and I could see no way to recover. I'm just an anti social nerd. I probably could do a personal brand with stand up comedy, books and T shirts but just don't want to do a personal brand in a big way.

I still write comedy in various blogs and am planning to release another comedic book this year. I also want to release more T shirts.

I would love to write TV shows and scripted comedy. Doing animated videos is a way to do this without bothering with funding applications and pitches. I wouldn't refuse writing or consulting jobs though.

I also like dance music and I would be keen to move into that industry in a low key way.